You are here: Home › News › How to use CubieTruck TSD version?

TSD (eSD) is a TSOP package storage medium following the SDIO protocol, that has the same package with Nand flash. TSD contains Nand Flash and card controller, the card controller has a good backup mechanism of firmware in order to ensure the security of data, then it’s not easy to lose data during the Read and Write process. TSD is a TF-Card actually, so CT-TSD can be called as CubieTruck TF Card Version. The following pictures will show the differences between TSD and Nand Flash. 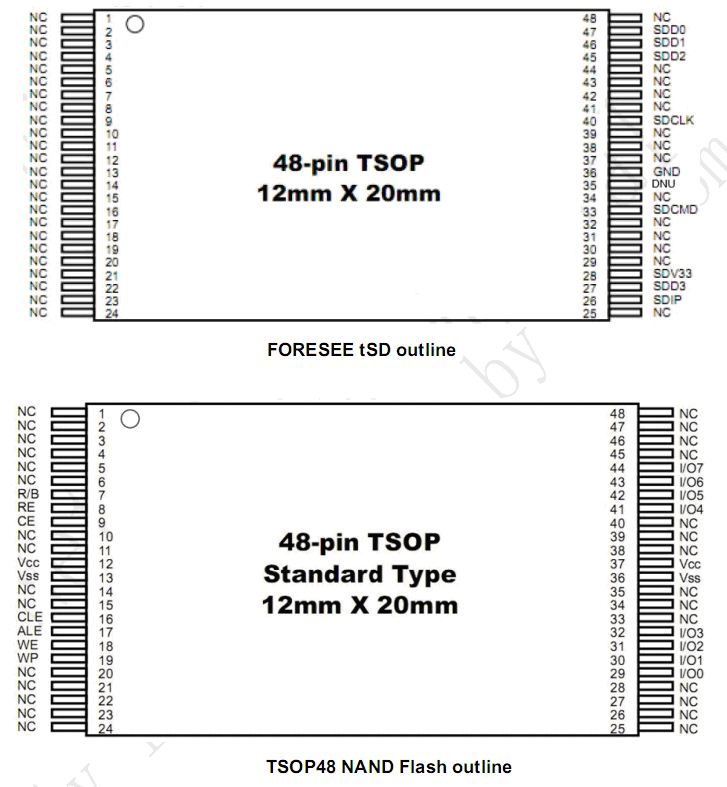 You may have doubt about TSD, why abandon the traditional Nand Flash and replace with TSD? Mainly for the following reasons:

We contrasted several kinds of storage medium from physical stability, data security, openness and read-write speed aspects. We found TSD’s physical stability and data security are better than the Nand Flash. And more the SDIO in A20 source code and associated register descriptions are open, but Nand Flash driver is not open from the chipset vendor. If you have very high requirements of data security and system stability, it is recommended to use TSD storage medium. 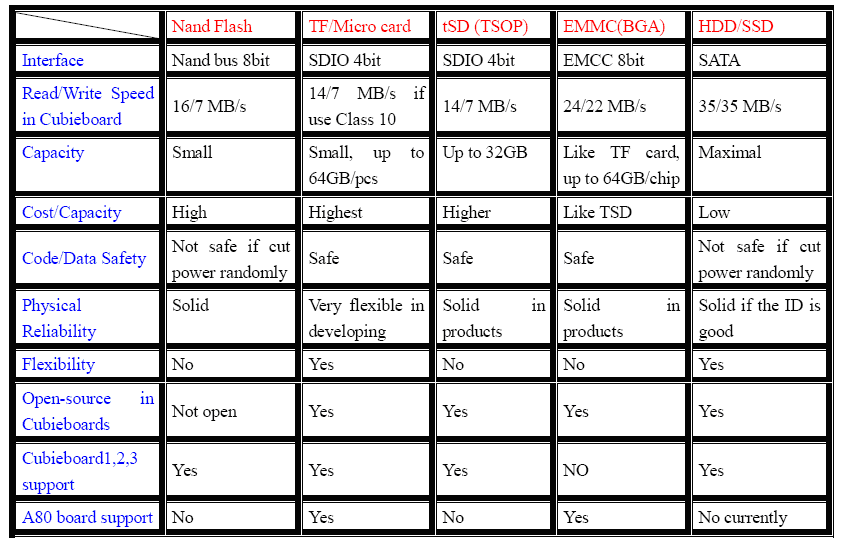 CubieTruck hardware design supports Nand Flash, TF Card and TSD, but not supports eMMC. Nand Flash has the risk of code missing, so we launched CT-TSD version for the special application areas.

3. How to distinguish TSD and Nand version?

CT-Nand and CT-TSD version boards are all the same except the different storage medium chips. The next figures show the differences between them. Nand Flash is printed with “SK Hynix” mark,  and TSD has “FORESEE” mark. 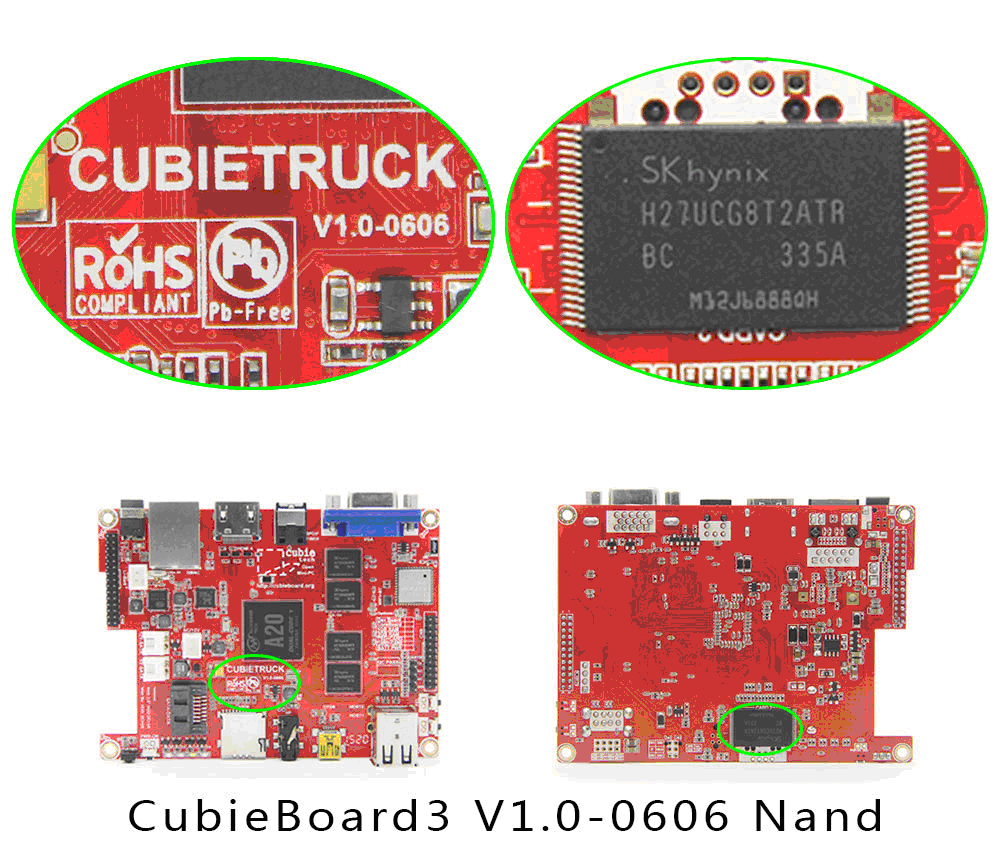 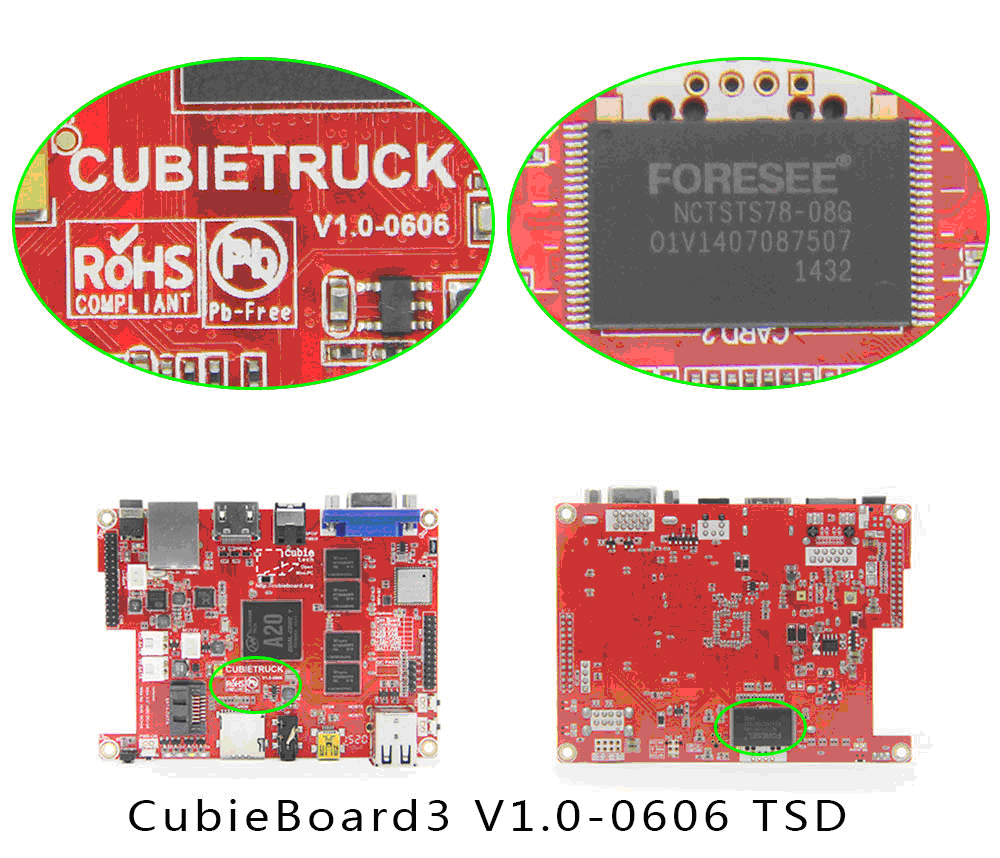 4. How to use CubieTruck TSD version?

Android and Linux firmwares have the different installation methods, please refer to the following table:

All the Android installations can use Allwinner’s tools. Linux OS installations use the open tools, such as Windows tool “W32diskimager”, Linux`s command line tool “dd”. The installation documents are here: http://dl.cubieboard.org/model/CubieBoard3/Doc/

In order to make Android firmware, you shall re-compile the SDK. You only need replace the boot0 binary file in Bootload source code, and re-package the firmware. The firmware can re-flash into the TSD chip by Allwinner’s PC tools, reboot the board then operating system will up. The detailed steps are as follows:

1）Get Android SDK
http://dl.cubieboard.org/model/Common/android-source/a20/v2.1/
http://dl.cubieboard.org/model/Common/android-source/a20/v2.1/README.TXT
2) Portting your drivers or applications based on the SDK, then replace boot0 file
$ cd lichee/tools/pack/chips/sun7i/bin/
$ cp boot0_nand_sun7i.bin boot0_nand_back.bin //backup origin bin file
$ cp boot0_sdcard_sun7i.bin lichee/tools/pack/chips/sun7i/bin/boot0_nand_sun7i.bin
3) Re-package firmware, the build steps can refer the following documents:
http://dl.cubieboard.org/model/CubieBoard3/Doc/android/Cubietruck%20android%20compile%20and%20make%20the%20firmware%20.pdf
You can use USB upgrade tools, such as PhoenixSuit, to re-flash the firmware to TSD, reboot it, your Android can boot from TSD flash.

The Linux SDK has been opened on CubieBoard github, everyone can download it. Cubietech is maintaining two kinds of OS in SDK. One is desktop OS, the other is server OS. The SDK can build these images, including the image booting from TF card and image flash OS into TSD chip. Of course, this SDK can make other Linux distributions, usually just need to replace the rootfs.

Please refer to the docs:
http://dl.cubieboard.org/model/CubieBoard3/Doc/debian-server/Linux-sdk-card-guide.pdf