You are here: Home › News › How to choose storage media in Cubieboard? 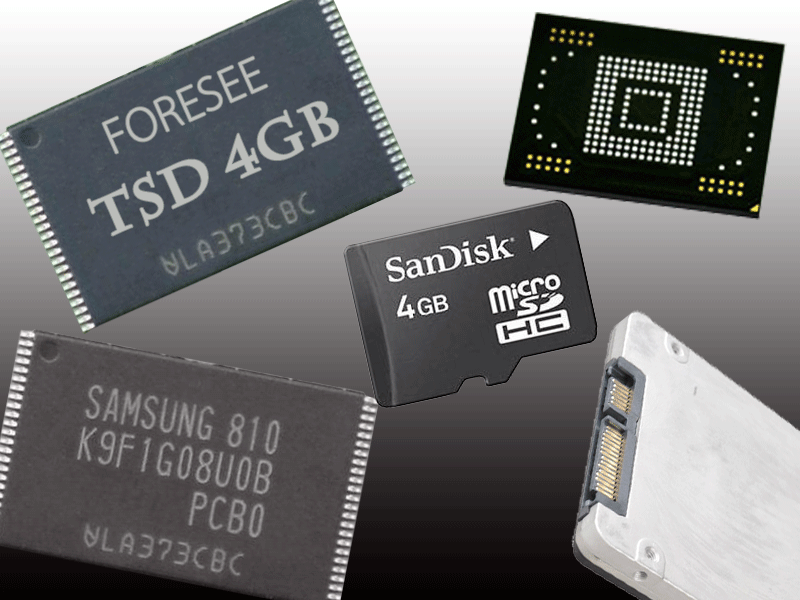 We have many considerations when choose the storage media in the computer system or some other electronic equipments. As we known, storage system is really very important and essential in computer architecture. And as the open source hardware, we must consider more than traditional computer because we have to face a broader application scale.

You know we use Allwinner’s main chip A10 and A20 since its lower price, high performance, rich interfaces and his kind open-source attitude. But we also found their good chip design in storage media support. So when we were designing, we tried our best to support these good features. Cubieboard1, Cubieboard2 and Cubieboard3 can support NAND FLASH, TF card, TSD and HDD, but they don’t support EMMC. EMMC is 8-lines chip with EMMC interface. It’s useless when used in A10&A20 because A10&A20 don’t support 8-lines EMMC interface. Fortunately, A80 can support 8-lines EMMC interface. So in the upcoming A80 platform, we will adopt EMMC solution to get faster read/write speed. Another issue everyone concerned is SATA port. In my opinion, SATA is not very important at this time if EMMC is supported. A80 board has up to 64GB storage capacity with just one piece of on-board EMMC chip and the speed is also not very low against SATA port. Even more, the USB3.0 port is also a very good way to extend the storage capacity with fast access speed. 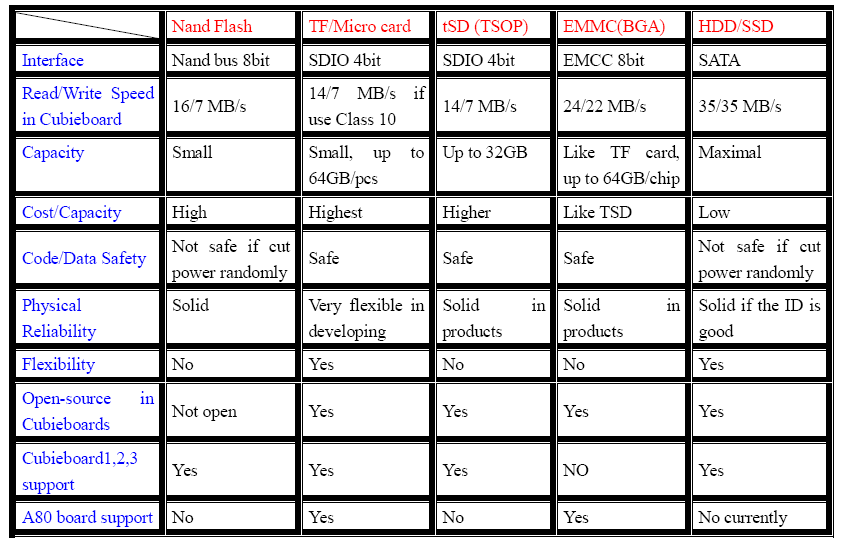 In the above table, I set out 5 sort of storage media which are very common used for your easy comparison. I think you will make a different choice if the position is different. Here I would like to give you some advices.

If you are a developer or playing Cubieboard for fun, Cubieboard dual-card version is very suitable. You can try lots of card based operating system from the community at your pleasure. But you should buy the TF card with Class 10 specification. Higher read/write speed will bring you more smooth using experiences and shorter start-up time. I once met the start-up time from 30s~90s with different TF card.

If you plan to apply Cubieboards in your product, you should consider this problem carefully. If the products have no backup power supply and will probable be cut power off randomly, you should not choose NAND Flash and HDD. The code/data may be damaged when power cutting off if a batch data writing has not finished. TSD and TF card can solve this great hidden danger. TSD is a kind of chip with TSSOP48 looks like NAND Flash. But actually it is a TF card which contains Nand Flash and card controller. The controller has good firmware backup mechanism.

In some other areas with backup battery, you can choose Nand Flash for its low cost. Nand Flash is widely used in lots of electronics devices. You can also guarantee the code safety at the level of software if it’s possible.

14 Responses to "How to choose storage media in Cubieboard?"